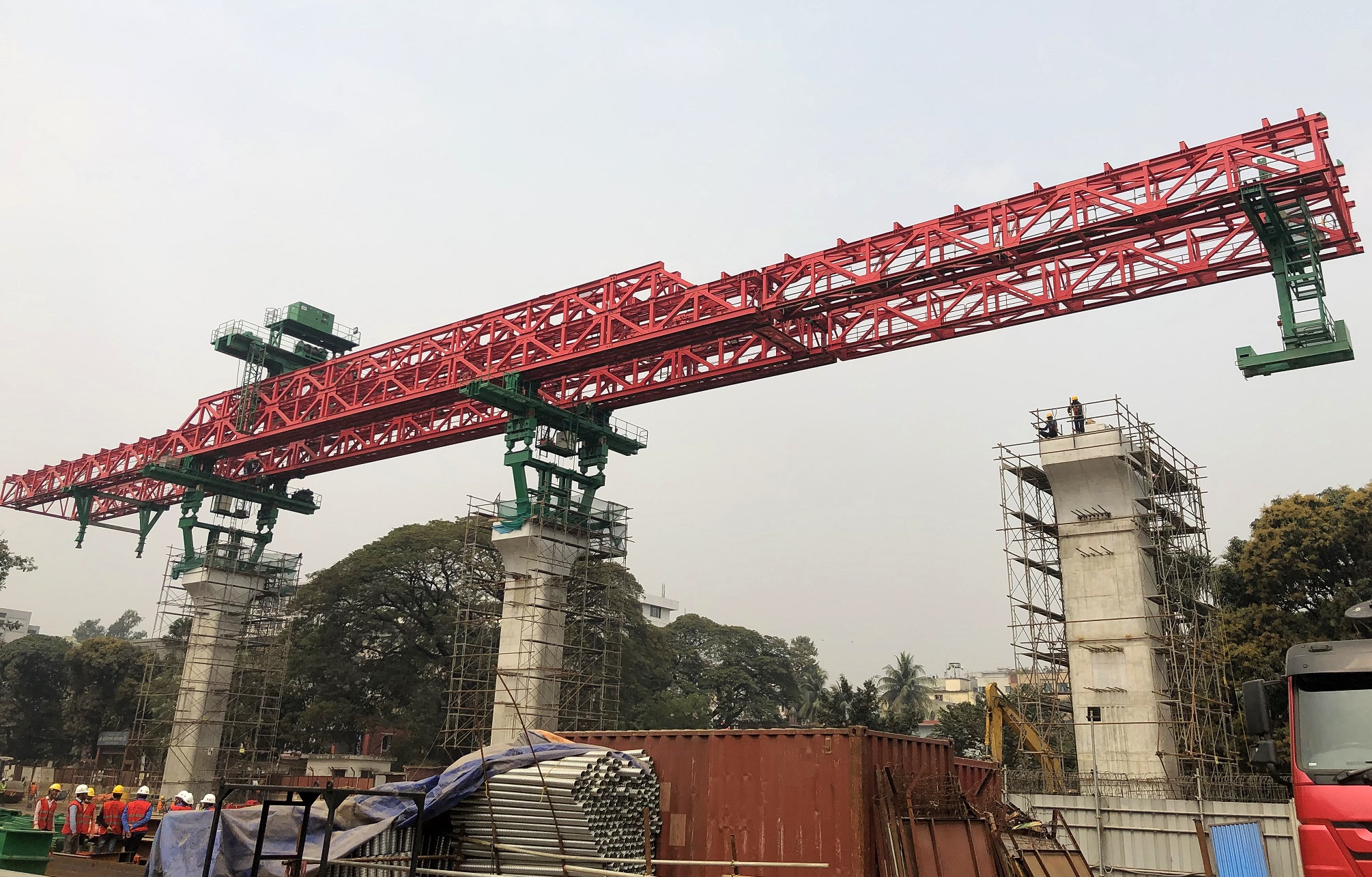 Dhaka, a sprawling city which was the seat of various historical empires in the past, is now the sixth most densely populated city in the world. The city lies on the lower reaches of the Ganges Delta and is the capital city of Bangladesh.

The Greater Dhaka Area has an estimated population of 21 million people. With the increasing amount of people moving into the Greater Dhaka Area to find opportunities, traffic congestion within the city is becoming one of the main problems faced by residents and visitors alike. From dusk to dawn, the streets of the city are clogged with heavy vehicles, buses, private vehicles, three-wheeler taxis, trishaws and pedestrians.

One of the solutions to the traffic problem is the construction of a Mass Rapid Transit System. The first line, called Line 6, is currently in construction by the Government of Bangladesh with the assistance of the Japan International Cooperation Agency.

" The fully elevated 20.1km Mass Rapid Transit System Line-06, consisting of 16 stations and 1 depot, will run from Uttara in the north to Kamalpur in the south. "

" Package CP-05 consists of the construction of 3.2km of elevated viaducts and 3 stations, namely the Bijoy Sarani Station, the Farmgate Station and the Karwan Bazaar Station. "

The fully elevated 20.1km Mass Rapid Transit System Line-06, consisting of 16 stations and 1 depot, will run from Uttara in the north to Kamalpur in the south. Dhaka Mass Transit Company Limited (DMTCL) has been set up to oversee the construction and also the operation of the MRT System. Line-6 has been divided into 8 packages, CP-01 to CP-08. The consultant for the project is NKDM Association consisting of Nippon Koei. Ltd, Nippon Koei India Pvt. Ltd., Delhi Metro Rail Corporation Ltd., Mott MacDonald Ltd., Mott MacDonald Pvt. Ltd. and Development Design Consultants Ltd. Package CP-05 has been awarded to the Joint Venture company of Tekken Corporation, Abdul Monem Limited and Abe Nikko Kogyo (known collectively as TAAJV).

Package CP-05 consists of the construction of 3.2km of elevated viaducts and 3 stations, namely the Bijoy Sarani Station, the Farmgate Station and the Karwan Bazaar Station. The construction scheme adopted for the viaducts is the span by span segmental construction as well as 2 special bridges using the balanced cantilever cast-in-situ method. A total of 1048 segments will be cast at a purpose build precast yard located at Gabtoli before being erected on to the spans.

Utracon Overseas has the privilege of being the specialist sub-contractor for this mega project in Dhaka City. The scopes awarded to Utracon Overseas are the supply of 2 units of Launching Gantries, all Dywidag Post Tensioning Systems, 2 pairs of Formtravellers, Formworks for Special Bridges Pier Segment and Segment Mould System for Short Line Match-Cast Segment System. All of the equipment which is supplied by Utracon Overseas are installed, assembled and operated by Utracon’s team of highly skilled and technical personnel.

Utracon was also tasked with designing the layout for the precast yard. The main factors in the design consideration were the efficiency of segment production as well as the limited space for the storage of the segments. A total of 6 segment moulds were fabricated and shipped to Bangladesh for the yard. The segments, with the heaviest segment weighing 56tons, are shifted around the yard using Overhead Gantry Cranes.

The erection of the segments is to be carried out by the 2 units of Launching Gantries. The Launching Gantries has a total capacity of 760ton for erecting the longest span which is 45m long. The typical span length is 30m. The delivery of the segment will be carried out using long bed trailers on public roads. As the MRT line is close to the city centre, most of the erection works will be carried out at night. Proper and detailed planning with the authorities is essential to carrying out the works smoothly.

" The main factors in the design consideration were the efficiency of segment production as well as the limited space for the storage of the segments. "

There are two special bridges within this package of the line. These special bridges will be constructed by formtravellers using the cast-in-situ balanced cantilever methods. The bridges will be crossing over busy intersections close to the city centre. As traffic will still be allowed during the construction stages, the safety of road users has to be considered during the design of the formtraveller. Additional safety platforms were installed to prevent loose items from falling down to the road.

Utracon will also be supplying and installing Dywidag Post Tensioning Systems. These consist of systems from Dywidag 12s 0.6” up to Dywidag 22s 0.6”. The installation of part of the anchorages will be at Gabtoli Precast Yard. The wedge plates and strands will be installed on-site, once the segment has been temporarily locked together on the top of the piers.

With the first MRT line currently in progress, Dhaka looks to manage the problem of the chronic congestion caused by the packed streets. Once completed, Dhaka will join the list of prominent cities around the world which boasts of having its own Mass Rapid Transit. Utracon is proud to be a valued project partner for this endeavour.