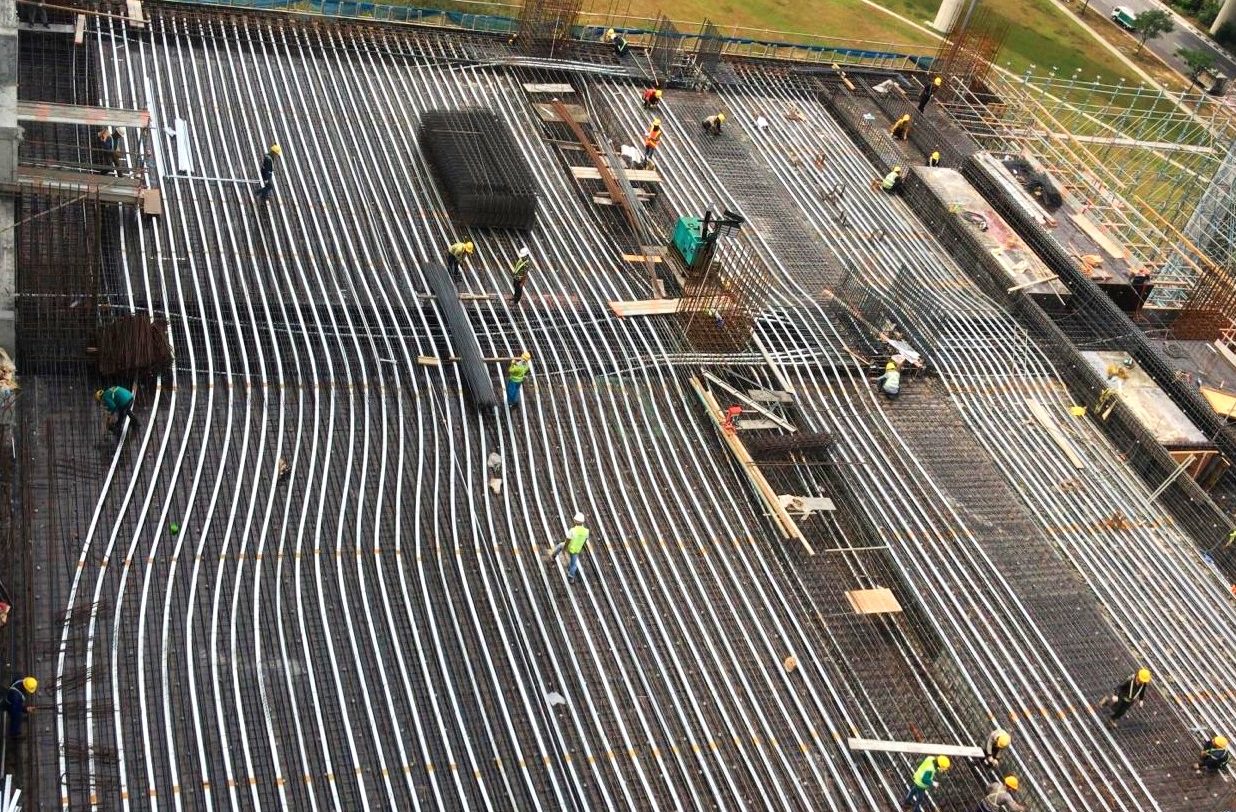 The typical X and Y direction grids of this project are huge, at 18m. With an industrial floor loading requirement of 25 kPa, it would be a challenge to construct the floors either in as a conventional in situ post-tensioned slab or as a fully precast solution.

The following slab systems were considered during the early planning stage:

a. In situ PT flat slab

Should a fully in situ slab system be adopted, flat slab would not make the mark due to the prohibitive 18m span even for a 2-way spanning slab system. Slab thickness would be 600mm thick and drop panel would be 1150mm deep. That will present a real challenge for the tableform system due to the massive concreting weight. 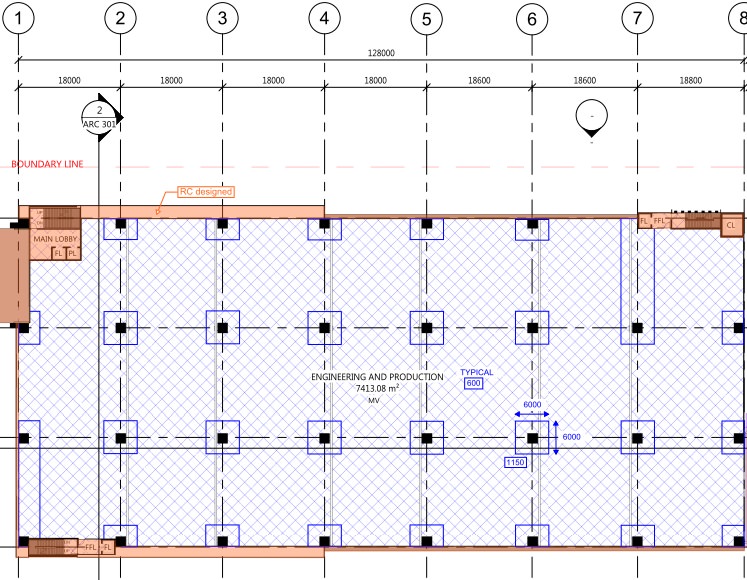 Concreting of such a flat slab may also pose a problem, especially at the huge drop panel measuring 6m x 6m x 1150mm. A special concrete mix may be required to slow down on the loss of hydration heat, which, if not controlled, may lead to potential shrinkage cracks. Use of any measures to arrest this problem would undoubtedly increase the cost and slowed down the site productivity.

b. In situ PT beam and slab

This slab system was not explored as one way spanning PT slab would be in excess of 700mm thick. The use of such a slab system would be too costly as far as monetary and site productivity are concerned. 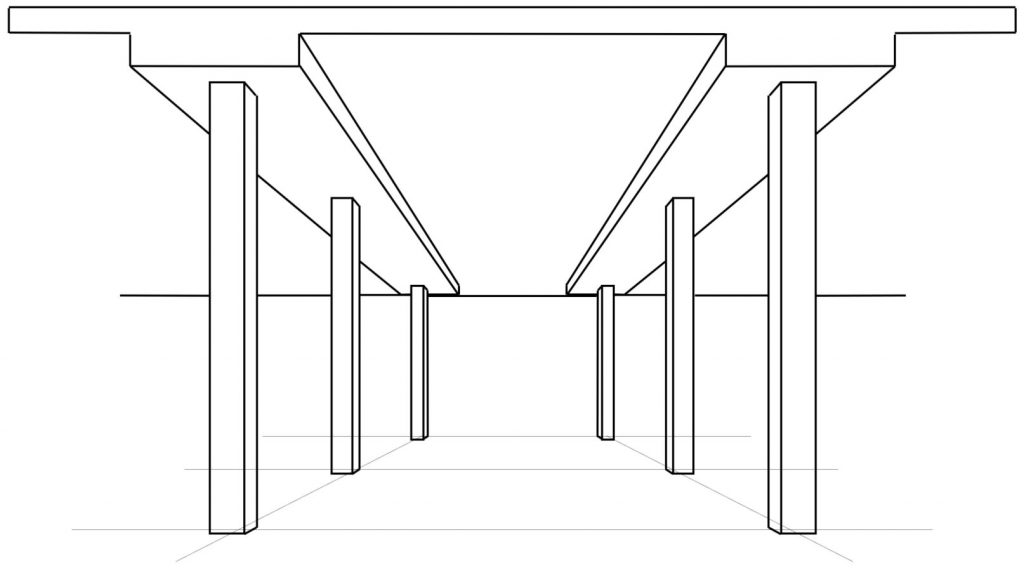 The use of a fully PC beam for an 18m main span design is theoretically workable, but practically very difficult and expensive to execute. This is due to the enormous weight (~100ton) of the fully PC beam, which will require the use of massive cranes and a complicated construction sequence (so as to allow access of the crane for lifting purposes).

The use of hollow-core slab is also not possible due to the 18m span of the structure, as the maximum thickness of HC slab produced by the local supplier is only up to a maximum of 500mm thick (which is not enough to span over the 18m grid with a live load of 25kPa).

With DfMA in mind, a study for the most optimum PC slab system was commissioned by the project team.

After a lengthy study, the following PC slab system has been adopted as it is economical and at the same time “light” enough to be handled using available lifting equipment in the market.

a. Main beam – PC shell with in situ PT tendon

Instead of a full section PC beam weighing 100ton, a PC shell beam has been adopted in the final design instead.

In order to reduce the overall depth and improve the design efficiency of the PC beam, post-tensioned tendons were incorporated into the beam design, as shown in the figure below:

To improve handling, the PC shell beam was designed as a 3m wide section. The width of the shell was chosen in order to maximise the design efficiency and to enable ease of placement of post-tensioned tendons. Its 3m width will also allow it to be transported using the ubiquitous low bed trailer.

The 18m PC shell beam was further dissected into 3 equal lengths of approximately 6m. This is to ensure that the PC shell beam would be light enough to be handled. Apart from that, it is also to ensure that it will not be easily damaged (due to its slender dimensions) by the multiple handling in the PC yard (from casting bed to the storage yard and ultimately to the transport vehicle) and during its transition from the PC yard to site.

To improve site productivity, all the beam’s links were cast with the PC shell beam. Hence, after the PC shell beam is installed at its final position, the site workmen are only required to install the post-tensioned tendons and the beam’s top rebar.

The upturn of the PC shell was designed to receive and to seat the T-slab’s end diaphragm. This will eliminate the need to put up side formwork during the concreting of the PC shell beam.

Instead of a double Tee section, a single Tee PC slab was adopted so as to cut down on its overall weight. This will greatly reduce the capacity of the tower crane on site needed to hoist the PC slab to its final position in this 6-storey building.

With the intent to further reduce the weight of PC elements in mind, pre-tensioning was incorporated into the T-slab design, resulting in a slim and shallow section, as shown in the picture on the right.

As mentioned earlier, all T-slabs come with end diaphragms. The presence of end diaphragms will help to stabilise the T-slab during storage and the final erection on site. It will also help to eradicate the need for the erection of formwork during concreting on site. 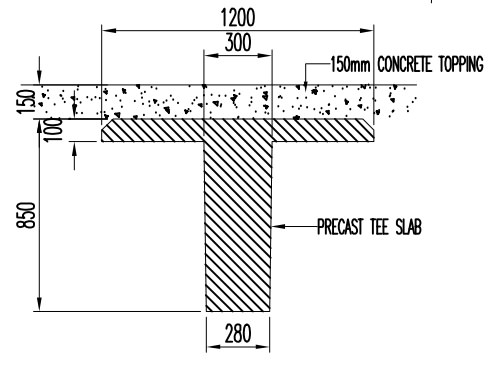 With this hybrid slab system, the maximum weight of PC elements on site is limited to the following:

Tower cranes, instead of gigantic mobile cranes, can thus be used for all lifting works on site.

The advantages of the above-adopted floor system can be summarised as follows:

a. Against conventional fully in situ PT floor system:

b. Against fully precast floor system:

One of the common grouses about the precast slab system is the formation of cracks due to rotation around the joints once the slab deflects under loading.

This is especially prevalent for hollow-core slabs where there is an absence of rebar connection with the main beam. This phenomenon is further being exacerbated for large span structures with high floor loading, like for this proposed project, where large long term deflections are anticipated. 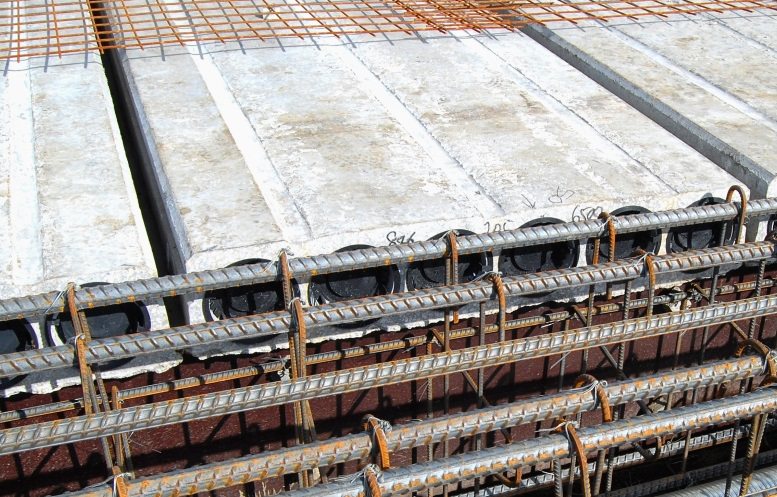 " For this proposed hybrid system, the structural connection between T-slab and PT main beam is greatly improved as compared to a floor system using PC hollow-core slab.

This is due to the presence of protruding bar from the T-slab which is cast monolithically with the in situ casting of the PC shell main beam. " 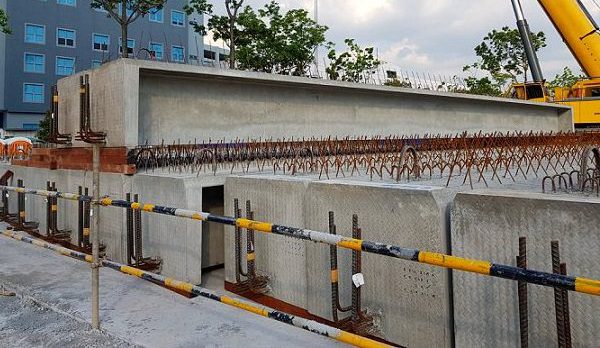 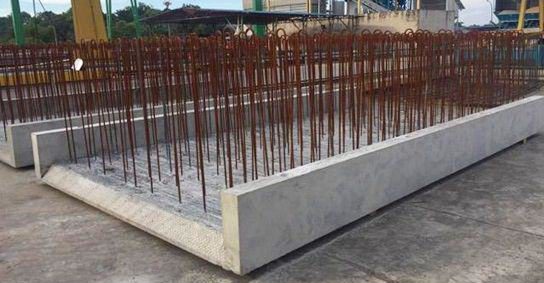 Furthermore, in the main beam direction, the precast shell’s links will ensure a solid monolithic connection with the in situ concrete. The in situ PT tendons also run through the column, and hence formed a very solid structural frame which enables effective moment and shear transfer from the slab to the vertical support system.

This hybrid system provides an ideal solution for this project which comes with large 18m spans in both directions and a high loading requirement of 25 kPa.

It embraces the ideals of DfMA for off-site construction and utilises good engineering design which incorporates both pre-tensioning (in T-slab) and post-tensioning (in main beam). With the prestressing design, the overall weight of the structure is significantly reduced, which is one of the most important criteria for precast handling and installation on site.

By having a precast shell main beam, it enables the tedious works involved in main beam construction to be done off-site. Links are all installed in the precast yard under a controlled working environment, and no formwork is required to be erected on site.